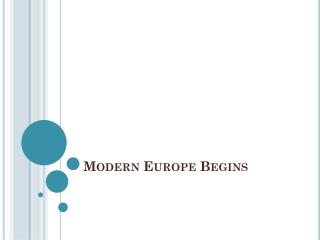 Modern Europe Begins. The Industrial Revolution began in Great Britain in the 1700s. New machinery and new methods were used to increase productivity. Productivity is how much work can be done in a certain amount of time. Modern Europe - . conflict and change in europe to the 21st century. the cold war. rise of superpowers. united states vs.

Aggression Begins In Europe - . in the early 1930s both japan and germany quit the league of nations. hitler then began

The War Begins for Europe - . europe falls, north africa, russian front, and the pacific. 1 september 1939 having

13.2: War in Europe Begins - . the weak responses of world leaders to hitler’s aggression leads to wwii. a. path to

13.2: War in Europe Begins - . the weak responses of world leaders to hitler’s aggression leads to wwii. a. path to