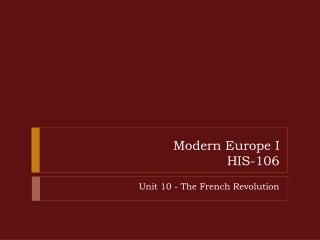 Modern Europe I HIS-106. Unit 10 - The French Revolution. What is a Revolution?. A “revolution” can be broken down into four requirements: An overthrow of the existing government but not just a simple coup d’etat The placement of a new governmental system to replace the old

Renaissance - . medieval or modern?. key topics. the politics, culture, and art of the italian renaissance the powerful

The Renaissance - . the beginning of modern europe. the renaissance. renaissance,&quot; french for