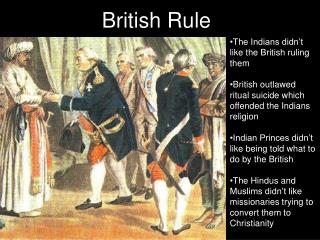 British Rule. The Indians didn’t like the British ruling them British outlawed ritual suicide which offended the Indians religion Indian Princes didn’t like being told what to do by the British The Hindus and Muslims didn’t like missionaries trying to convert them to Christianity. British Rule - . pgs. 263-264. government in the colonies. new spain and new france were governed by monarchs in europe.

Under British Rule - . pages 193-198. (do not write this) countries colonized by britain. north america canada, the

India Under British Rule - British imperialism in india. east india company. set up trading posts in india during the

Culture under British Rule - . population of the new british colony. understand that the canadiens were a large majority

British Rule in India - . the sepoy mutiny. british colonial india in the early 1800’s was administered not by the

The British Rule of India - . the british empire. the devilfish in egyptian waters. how did the british rule india?. it