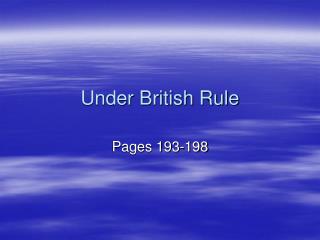 Under British Rule. Pages 193-198. (Do not write this) Countries Colonized by Britain. North America Canada, the U.S (left) Richard Hamilton , Just What is it That Makes Today's Homes So Different, So Appealing? Collage (photomontage)

‘A Hanging’ by George Orwell - . ♣ purpose. the main purpose of george orwell’s non-fiction essay, “a