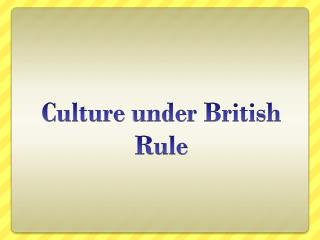 Culture under British Rule. Population of the new British colony. Understand that the Canadiens were a large majority of the population. What did the Canadiens think ?. Under British Rule - . pages 193-198. (do not write this) countries colonized by britain. north america canada, the

India Under British Rule - British imperialism in india. east india company. set up trading posts in india during the

British Rule - . pgs. 263-264. government in the colonies. new spain and new france were governed by monarchs in europe.

British Rule - . the indians didn’t like the british ruling them british outlawed ritual suicide which offended the

British Culture - . the culture of the united kingdom refers to the patterns of human activity and symbolism associated

British Culture - . by brianna jones. food . there are wide and varied cuisine in britain today. no more do they suffer

British Culture Questions: - . the answers!!. 1. what are the bagpipes?. 2. what and when are bank holidays?. a bank

British Political Culture - . 02/15/13. britain to restrict workers from bulgaria and

British Music Culture - . britain is one of the most famous countries on the music world. do you know why ?. the