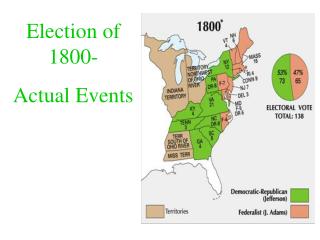 Election of 1800- Actual Events. I. The four candidates were :. Republicans: Thomas Jefferson and Aaron Burr. Federalists: John Adams and Charles Pinckney. c. Aaron Burr and Thomas Jefferson tied in the Electoral College. d. Both got 73 votes Yuille and Cutshall 1986 - . can the findings of laboratory based ewt studies be generalised to more realistic

Events - . here, we review event handling one more time. to understand how events work in java, we have to look closely