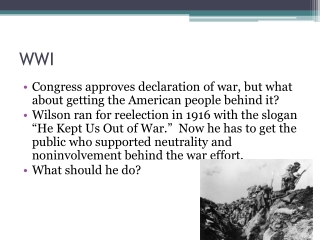 WWI. Congress approves declaration of war, but what about getting the American people behind it? Wilson ran for reelection in 1916 with the slogan “He Kept Us Out of War.” Now he has to get the public who supported neutrality and noninvolvement behind the war effort. What should he do?.