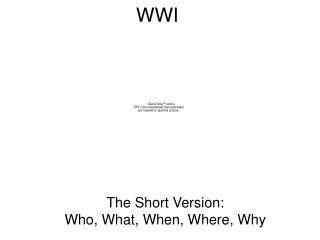 WWI. The Short Version: Who, What, When, Where, Why. Factors that caused WWI. WWI was caused by the combination of 4 major factors. 1. Imperialism, 2.Militarism, 3.Nationalism, 4.Alliances 1. Imperialism- Belief in building an empire “when stronger nations conquer weaker nations”