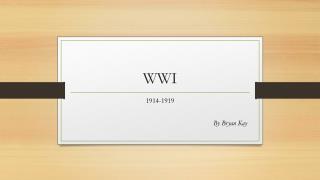 WWI. 1914-1919 By Bryan Kay. The Battle of Verdun. Verdun was a military stronghold with thirteen concrete forts dug into the ground which made it one of the strongest French cities. However it was unknown that just months before its guns were taken out to be used elsewhere.