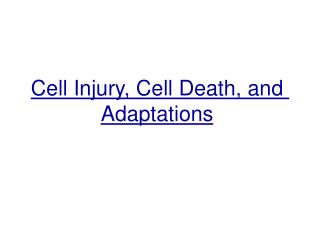 CELL INJURY AND DEATH - . by dr.k.v.bharathi. cell injury. results when cells are stressed so severely that they are no

cell injury ii cellular adaptations - Hyperplasia. increase in the number of cells in an organ or tissuemay or may not be

Cell death , - Normal cells that are subject to a damaging stimulus may become sublethally damaged. if the stimulus