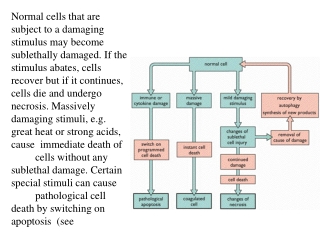 Normal cells that are subject to a damaging stimulus may become sublethally damaged. If the stimulus abates, cells recover but if it continues, cells die and undergo necrosis. Massively damaging stimuli, e.g. great heat or strong acids, cause immediate death of Programmed Cell Death - . why do some cells need to die?. to accomplish morphogenetic ends , eg. separation of fingers

CELL INJURY AND DEATH - . by dr.k.v.bharathi. cell injury. results when cells are stressed so severely that they are no