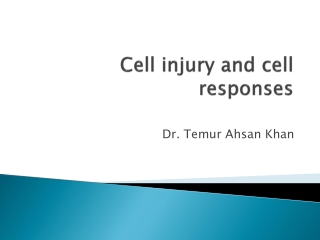 Regulating the Cell Cycle - . chapter 10-3. controls on cell division. when there is an injury such as a cut in the skin

General body responses to noxas - . prof. tatár dept. of pathophysiology in martin. injurious influences of noxas do not

Cell Communication - . chapter 11. 11.1 – external signals are converted to responses within the cell. evolution of

MECHANISMS OF CELL INJURY - . as we have discussed the causes of cell injury and necrosis and their morphologic and