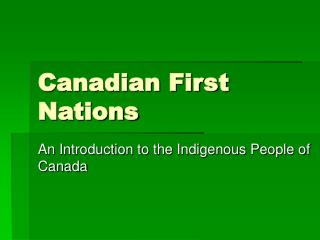 Canadian First Nations. An Introduction to the Indigenous People of Canada. Canadian Culture. Canada is a pluralistic society. This means that our society is made up of many groups of people, each with its own unique identities, ideas, perspectives, and culture. Buy Canadian First - It used to be that, as consumers, we didn’t think twice about the long-term effects of our