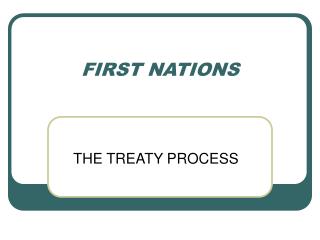 FIRST NATIONS. THE TREATY PROCESS. Native people – descendants of Canada’s original inhabitants – have had a complex, and often difficult relationship with the non Natives (mainly European) Europeans came over about 500 years ago Natives became a small minority on own land