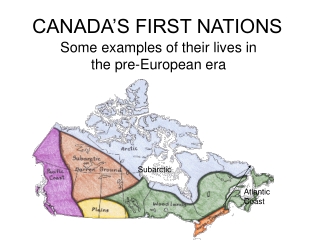 Who were they? - . the pacific coast first nations were different from other tribes in canada because they were a very

The Changing Face of Canada - . canada in the post-war world: the 1950’s. population boom!. baby boom : increased the

First Nations of Canada Unit - . definitions. aboriginal – the descendants of the original inhabitants of turtle island

CANADA - . 1. what is the commonwealth of nations? where is canada situated? what does it border on? what is the area and

Canada The U.S. And The World - . the end of the cold war. war and peacekeeping. canada was previously associated with