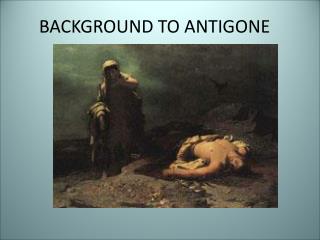 BACKGROUND TO ANTIGONE. ANCIENT GREECE. Greece was not one unified country, but was made up of a number of independent city-states, including Athens, Sparta, Corinth and Thebes. Greek Theatre. Greek Theatre. Antigone Background - . religion. the greeks believed that their beliefs in the gods would make their daily lives