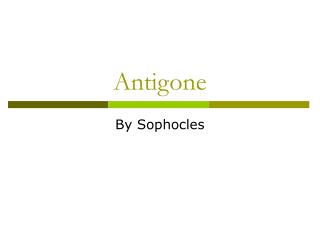 Antigone. By Sophocles. Guiding Questions. How does Greek drama compare to our modern theater? How do the themes in plays from other times and cultures relate to issues of today?. TSWBAT. Appreciate ancient Greek drama through study of a play by Sophocles Greece after the 1990s immigration wave: A difficult adaptation to an economic windfall - Antigone lyberaki professor of

Antigone - . a greek tragedy by sophocles. the etymology of the word &quot;tragedy&quot; is &quot; tragos

Antigone Introduction - . i. greek and roman influences on literature. a.     the way we look at literature, art,

Antigone - . by sophocles. loyalty. what is loyalty? how do you decide who to be loyal to? have you ever had to prove