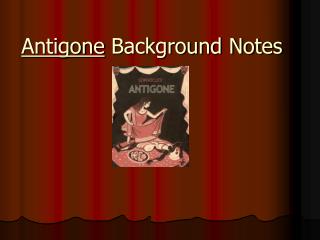 Antigone Background Notes. I. Origin of Tragedy. A. Religious festivals in the spring to honor Dionysus. Dionysus (Bacchus), god of wine and revelry. B. Thespis, “Father of Drama” (thespians) 1. introduced the first actor and dialogue C. Sophocles 1. added third actor TODAY we will do… Notes Discussion Reading “Nature of Science” packet - . rule for notes raise your hand to talk or

How to take: - . divide the paper into 3 sections. a vertical line 5 cm from the left. a horizontal line 5 lines up from

Bless Me, Ultima - . by rudolfo anaya. notes. you will need to take notes on the notes page in your study packet from the