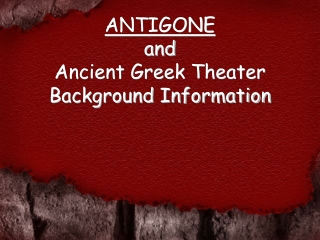 ANTIGONE and Ancient Greek Theater Background Information. Basic Overview. Antigone is about a woman who disobeys the laws of her ruler Creon in favor of the unwritten laws that she feels more properly govern society. Key facts and events to know. Pericles, Creon, & Athenian democracy: Greek Theater - . by michael, lauren, and linda. history of greek theater. in the theater, there were almost always three

Greek Tragedy: Intro to Antigone - . the role of gods in greek tragedies.

Antigone and Greek Theater - . dionysus the god of wine and fertility thought to liberate believers from personal

It’s all Greek to me! - . ancient greeks and the tragedy of “antigone”. aristotle’s definition of

Antigone and the Greek theater - . thebes, greece. the sons shall suffer for the sins of the father. greek tragedies: