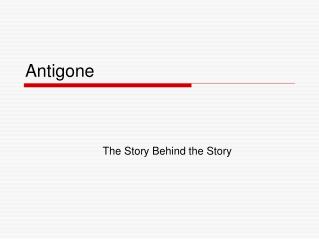 Antigone. The Story Behind the Story. The Myth of Oedipus. Laius (King of Thebes) and Jocasta (Queen) conceive a child. Laius consults the Oracle at Delphi for a prediction of the future The Oracle predicts that a son born to Laius and Jocasta will kill his father and marry his mother. Greece after the 1990s immigration wave: A difficult adaptation to an economic windfall - Antigone lyberaki professor of

Antigone - . a greek tragedy by sophocles. the etymology of the word &quot;tragedy&quot; is &quot; tragos

Antigone Introduction - . i. greek and roman influences on literature. a.     the way we look at literature, art,