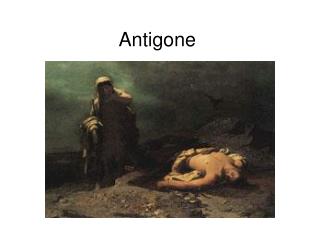 Antigone. Greek playwright Sophocles wrote the last play in the Theban Trilogy, Antigone , around 442 B.C. The Theban Trilogy consists of Oedipus Rex (Oedipus the King), Oedipus at Colonus , and Antigone , but the play considered the last of the three was, ironically, written first. Oedipus Rex and Antigone - . a formal review using literary elements. character analysis : oedipus. at the start of the

Structure of Greek Tragedy - . prologue a monologue or dialogue preceding the entry of the chorus, which presents the

Turn in Antigone Study Guide and Writing - . you need your blue book!. add to your vocabulary notebook. literary term.

ENGLISH II DECEMBER 7 TH - . before we continue to study antigone , let’s briefly discuss how to use context clues in

Antigone - . themes can be subject to opinion…. fishbowl set-up how-to. only people sitting in the inner circle may

Antigone and the Greek theater - . thebes, greece. the sons shall suffer for the sins of the father. greek tragedies:

Antigone: TheWorld of Sophocles - . sophocles. who was sophocles? born 495/6 b.c. in colonus father was a wealthy armorer