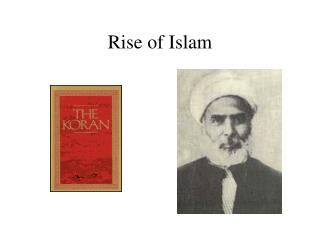 Rise of Islam Arabs Arabian Peninsula Nomads Tribes ruled by Sheikh Domestication of the camel. Major carrier of goods between the Indian Ocean and the end of the Silk Road. Muhammad

MUHAMMAD and the RISE OF ISLAM - . essential question : who was muhammad and how did islam unite the arab people? .

The Rise of Islam - . european middle ages taken from: mr. blais. the islamic world. early arabia. the bedouins were

The Rise of Islam - . arabia in late antiquity . struggle between sasanian empire (persian, zoroastrian) and byzantium

The Rise of Islam - . chapter 10, section 1. deserts, towns, and trade routes. the arabian peninsula a crossroads of

The Reformation - . by: cee descargar ap euro per 6 9/6/11. prompt:. compare and contrast the motives and actions of