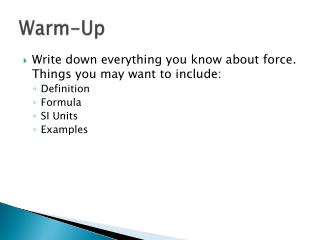 Warm-Up. Write down everything you know about force. Things you may want to include: Definition Formula SI Units Examples. Questions on Chapter 3?. Forces in One Dimension. Chapter 4. Force. A force is a push or pull Forces are vectors Represented by “ F ” Has SI units of Newtons