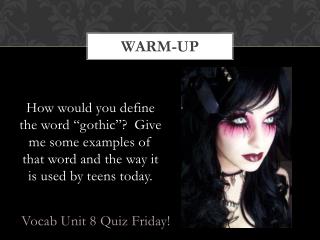 Warm-Up. How would you define the word “gothic”? Give me some examples of that word and the way it is used by teens today. Vocab Unit 8 Quiz Friday!. Charlotte Bronte. Born in England in 1816