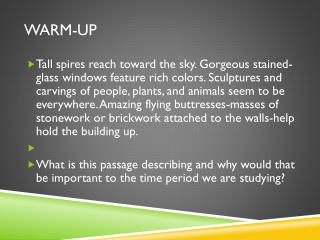 Warm-up. Tall spires reach toward the sky. Gorgeous stained-glass windows feature rich colors. Sculptures and carvings of people, plants, and animals seem to be everywhere. Amazing flying buttresses-masses of stonework or brickwork attached to the walls-help hold the building up.