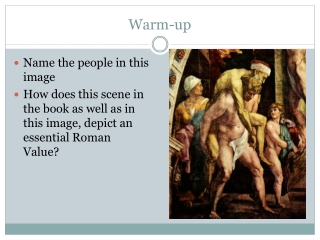 Warm-up. Name the people in this image How does this scene in the book as well as in this image, depict an essential Roman Value?. The Emperors of Rome No Longer in BCE!. Three Stages Age of Augustus: 31 BCE- 14 CE The Julio- Claudian Dynasty- 14 CE- 16 CE Flavian Dynasty-69 CE- 96CE