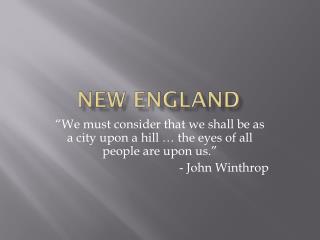 New England. “We must consider that we shall be as a city upon a hill … the eyes of all people are upon us.” - John Winthrop. Founded by English Puritans. These were Anglicans who felt that not enough had been done to distance the Anglican church from the Catholics.