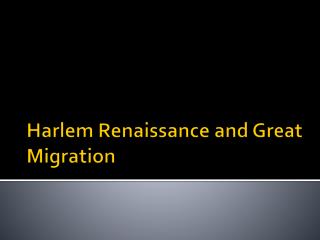 Harlem Renaissance and Great Migration. Warm-up. Think back to what we have learned in this unit. List three push factors for why people moved to America and three pull factors. . Debate. Debate will be Monday March 28th

The Art of the Italian Renaissance - . renaissance. means “rebirth,” specifically the revival of art and learning

Renaissance Special Thanks To Ms. Stewart for the PowerPoint - . aps standards. whi.13 the student will demonstrate

The Renaissance - . chapter 15 section 1: the italian renaissance. the renaissance. society and politics . after viking

Authors in World History - . who wrote the koran?. muhammad the prophet. what religion did muhammad found?. islam. name