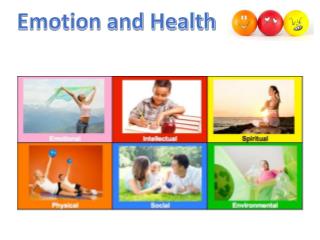 Emotion and Health. Emotions colorize, energize, and motivate behavior . Emotion is “an increase or decrease in physiological activity that is accompanied by feelings that are c haracteristic of the emotion and often accompanied b y a characteristic behavior or facial expression.”. Emotion, Stress, and Health - . concept of emotion. definition: a class of subjective (personal) feelings elicited by

emotion and gender - Vote!!!!. empathy and altruism concepts. prosocial behavior is motivated by ?altruistic behavior is

Cognition and Emotion - . emotions consist of 3 components physiological changes that are not conscious (autonomic,

MOTIVATION AND EMOTION - . ch10. what’s in this chapter? (unit objectives). questions to be answered what motivates

Emotion and Cognition - . historically emotion and cognition were thought to be distinct and separable mental