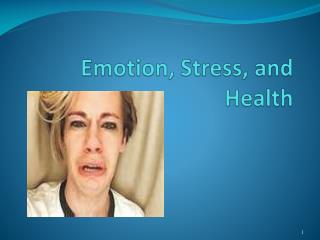 Emotion, Stress, and Health. Concept of Emotion. Definition: a class of subjective (personal) feelings elicited by stimuli that have high significance to an individual stimuli that produce high arousal generally produce strong feelings are rapid and automatic

Motivation and Emotion - . psychology 101 woodruff, spring ‘07. goal. motivation. what motivates you? where do you see

HEALTH - . chapter 1 mental health. who is in charge of you?. you are!. if you know where you are going, and you know why

Stress &amp; Emotion June 24, 2014 - . emotion. what is emotion?. as component of personality, decision making not

Roseman‘s Appraisal Theory of Emotion - . roseman et al. (1996) developed an appraisal theory of emotion that is based

Chapter 12 Emotions, Health, and Stress - . emotion. emotion though emotions comprise a significant and crucial part of