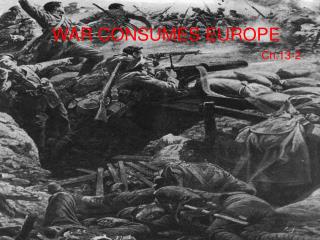 War Consumes Europe - . wwi – the beginning. the alliance system collapses. nearly all the nations of europe at war

War Consumes Europe - . the alliance system collapses a bloody stalemate along the western front the battle on the

The Great War Consumes Europe - . take out your homework, notebook, &amp; text. warm-up activity. for each image you

War in Europe - . mr. white’s world history. objectives. after this section, we should be able to: explain how hitler

WAR IN EUROPE - . battles to know on the european front. -stalingrad -d-day -bulge. war in the pacific. -philippines

War in Europe - The german offensive. war in europe. the need for lebensraum. hitler desperately wanted new territory for

Europe at War - . story of four leaders, 1918. lcpl adolf hitler of the bavarian army. winston churchill as an wwi

War in Europe - . hitler is on the move. late in 1937, hitler was anxious to start his assault on europe claimed that

Post-War Europe - . march 14-17, 2014 objective: students will draw conclusions about the end of world war ii and the

War in Europe - . unit 4 section 2. hitler’s motives for expansion. the future of the third reich depended on