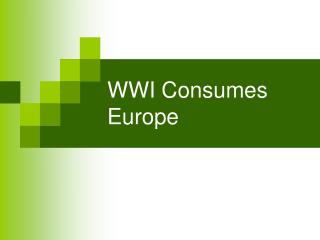 War Consumes Europe - . wwi – the beginning. the alliance system collapses. nearly all the nations of europe at war

War Consumes Europe - . the alliance system collapses a bloody stalemate along the western front the battle on the

The Great War Consumes Europe - . take out your homework, notebook, &amp; text. warm-up activity. for each image you

Map of Europe before WWI - . topic : reasons for war in 1914 objectives: 1. explain the early causes of wwi. 2. identify

Post WWI-Europe and rise of Totalitarianism - . lets talk about wwi and how it ended. what do you remember?. treaty of