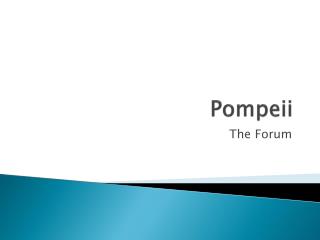 Pompeii. The Forum. Map of the Forum of Pompeii. A - Municipal Offices B - Basilica C - Temple of Apollo D - Horrea E - Arch of Germanicus F - Temple of Jupiter G - Macellum H - Temple of the Lares Publici I - Temple of Vespasian J - Building of Eumachia K - Comitium.

THE TOMBS OF POMPEII AND HERCULANEUM

THE BATHS OF POMPEII AND HERCULANEUM

Pompeii and Herculaneum: Influence of Greece and Egypt - . greek rather than roman? . the greek influence in both towns

Social Status: Pompeii and Herculaneum - . by lucy tierney. a young woman who appears to be educated .

The Temples of Pompeii And Herculaneum - . greek roman foreign . greek

STAGE 1 - . pompeii. pompeii was situated at the foot of mountain vesuvius on the bay of naples, and may have had a