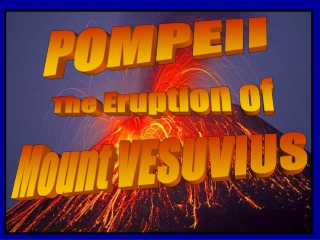 POMPEII. The Eruption of. Mount VESUVIUS. These are the ruins of the Roman city of Pompeii . Pompeii was a busy Roman city that was built near to the volcano mountain, Mount Vesuvius . The Eruption of Vesuvius - . www.misterconnor.org. catastrophe. the eruption of vesuvius started on the morning of 24

Clothing in Pompeii - . taken from a lararium in pompeii, this segment of a wall painting shows both the tunica

Pompeii, Italy - . marley henderson. map. photos. tools and techniques. some tools that the archaeologists use are:

POMPEII QUEST - . i am the “spirit of

Palaestra - . pompeii , herculaneum and sport. pompeii. the pompeii palaestra was built during the augustan period. it