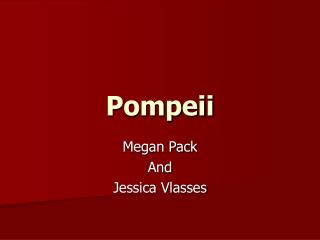 Pompeii. Megan Pack And Jessica Vlasses. “The Silver Lining”. Although approximately 20,000 lives were lost, Pompeii provides us with a perfectly preserved glimpse of the past – 79 A.D. to be exact. Buildings, artwork, and even some people were preserved.