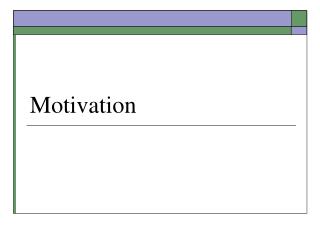 Motivation . Coordination of the Systems. Systems are complementary. Both are active to some extent at the same time – not alternating. What happens during anger? Sympathetic arousal increases blood pressure.

Motivation - . http://www.youtube.com/watch?v=_7i7iasuidw&amp;feature=pyv. what is motivation? what do you think it

Semantic Web - . social semantic web. where are we?. agenda. motivation from web to web 2.0: technical solution and

Unit V – Motivation and Emotion - . memory/cognition – what we know about the world learning – how we make

MOTIVATION AND EMOTION - . what’s in this chapter? (unit objectives). questions to be answered what motivates you to do

A Second Self - . motivation, imagination and l2 identity. outline. background to motivation research problems with

Consumer Motivation - . chapter four. learning objectives. to understand the types of human needs and motives and the