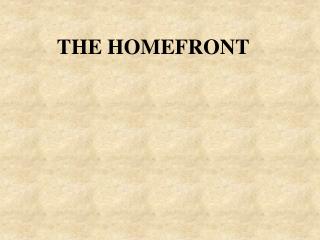 THE HOMEFRONT. Ways Americans helped win the War…. Economic Resources. Military Resources. Human Resources. Women in the War. In the past, women really did not played a role in war at all. WWII played a part in advancing the role of women both at work and in the military Homefront - . mobilizing for war. one similarity between wwi and wwii on the home front was that. a. japanese americans

World War I -- America on the Homefront: &quot;The Poster War&quot; - . war mobilization. 1. enlistment. the most

Revolution in America - . end of revolutionary war life on the homefront life in military. treaty of

EFFECTS OF THE WAR ON THE HOMEFRONT - . committee for public information propaganda posters anti-german sentiment

World War II: Continued - . before the war us enters the war the front lines the pacific europe end of war liberating

Life on the Homefront - . what is the homefront ?. the homefront. refers to civilian activities during wartime not

War on the homefront - . chapter 16 section 2. congress and the war. congress created new agencies to coordinate

WORLD WAR II THE HOMEFRONT - . congress declared war on japan after the attack on pearl harbor . within two weeks the

Propaganda During World War I - . or: why people joined the army instead of going to college. propaganda had a variety of

America on the Homefront - . aim: what was life in america like before and during the war? do now: take a quiz - you have