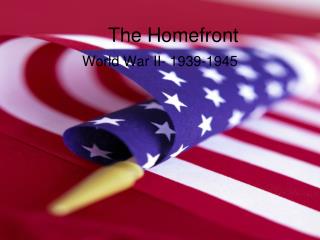 WWII on the Homefront - . hush unit 4. the shift to wartime production. fdr and his administration set out to win the war

NAMI Homefront : Education and Support for the Families of Service Members and Veterans - . title of slide. welcome!.

WWII On The Homefront - . selective service and the gi • after pearl harbor, 5 million men volunteer for military

Essential Question : - How did american efforts at home help win the war and transform the american economy &amp;

Essential Question : - How did american efforts at home help win the war and transform the american economy &amp;

WWII and the Homefront - . increased gov’t control. national war labor board - allowed negotiation over benefits, but

TheWW1 Home Front - . how daily life was affected by the war. great britain’s homefront. war was met with great

What was the Weimar Republic? - . setting the context wwi and the treaty of versailles. the powder keg of world war i.

WWII On the Homefront - . mobilization, racial tension, and effects. manpower and financing. more than 15 million men and

The Homefront During World War II - . chc2d8 ms. gluskin. day 1. the war effort. remember back to wwi. mistakes were made