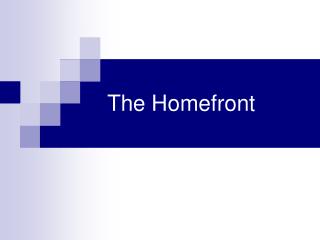 The Homefront. FDR Utilizes Propaganda. Fighting for the Four Freedoms Freedom of Speech Freedom of Worship Freedom from Want Freedom from Fear. OCD: Office of Civilian Defense. FDR: “Contribute an hour a day for the USA.” Volunteer air raid wardens “Over Here ” The Homefront During World War I - . “over here”. to win over there , the u.s. had to effectively

By: T.A.Y. - War on the homefront. by: t.a.y. propaganda . patriotism and propaganda were high thousands of posters and

The U.S. Homefront (Pt. 1) - . what was going on in the united states after the declaration of war?. revving up the war

WWI: The Home Front - . how did the american s on the homefront support or oppose wwi ?. peace groups. pacifists - people

18.4 The Texas Homefront - . the wartime economy and the draft. although texas suffered less than the other confederate

P roviding emergency financial and other assistance to the families of our service members and wounded heroes.