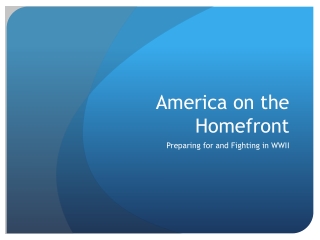 America on the Homefront. Preparing for and Fighting in WWII. American Women During WWII. “If you can drive a car, you can run a machine.”. “Why do we need women workers? You can’t build ships, planes, and guns without them.”. P roviding emergency financial and other assistance to the families of our service members and wounded heroes.

Latin America - . at a glance. latin america. a region that was influenced by spanish/portuguese settlers 1/6 of

The U.S. Homefront (Pt. 1) - . what was going on in the united states after the declaration of war?. revving up the war

“Over Here ” The Homefront During World War I - . “over here”. to win over there , the u.s. had to effectively