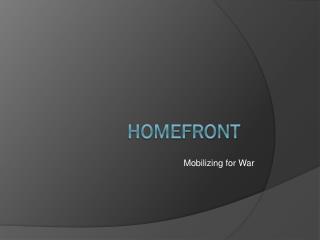 Homefront. Mobilizing for War. One similarity between WWI and WWII on the home front was that. A. Japanese Americans were forcibly interned B. young men protested by burning their draft cards C. women filled many jobs traditionally held by men The Homefront - . part 2. getting citizens involved. it was important to have the citizens at home feel like they were

The Homefront - . world war ii. created by mr. johnson. objective. 10.03 – describe and analyze the effects of the war

The Homefront - . japanese internment. objective. analyze the effects of the war on civil liberties for japanese

The Homefront - . economic gains. industrial output increases. increase in the availability of jobs. improvements in

WWI &amp; Homefront - . may 1917 required registration of all men from 18 to 45 no substitution aloud! yet exemptions