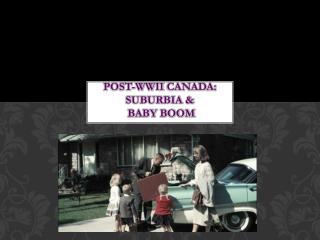 POST- wWII Canada: suburbia & baby boom. What are the cultural values that characterized the 1950-1960’s? What values, needs did people think suburbia would fulfill? Did it succeed? How did television and marketing influence consumption patterns and what are the consequences today? . Ethnic groups at WWII - . objective: evaluate the roles of minorities and their contributions to wwii for america std