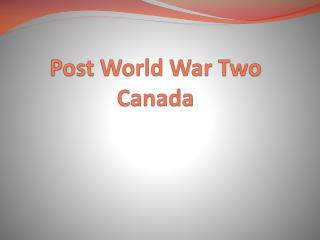 Post World War Two Canada. Canada in the Post World War Two World . Canada’s Role on the International Stage 1945- Canada is one of the world wealthiest nations after the initial post-war turmoil- Canada settles into a era of prosperity -GNP has doubled since the start of the war World War Two - . part one. appeasement. following the rearmament of the german army by hitler, the government’s of

World War Two - . economic and political causes of world war two . appeasement: allies give in to hitler . when germany

World War Two - . start of the war. on september 1 st 1939 germany invaded poland starting the war germany was able to

World War two - . by erin class 9. introduction. in this powerpoint you will learn about the life of winston churchill ,

world war two - . by archie and ellen. int oduction. world war two started in 1939 and end in 1945.children were evacuees

World War Two - . causes *** remember with the acronym: fart. how did the treaty of versailles become a cause of world

WORLD WAR TWO - . by tyee and amber. rationing. foods like chocolate cake and sugar were rationed through out the war.

WORLD WAR TWO - . for almost six years from 1939 to 1945 britain fought the toughest war it had ever experienced. world

World War Two - . fill in the blanks on your notes sheet and take extra notes on the side if you don’t know already