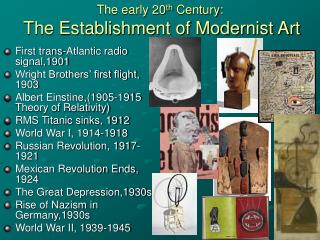 The early 20 th Century: The Establishment of Modernist Art The early 20 th Century: The Establishment of Modernist Art

History of Tourism - . travel and exploration are basic to human nature. man has traveled since the earliest times

Nineteenth century: historical linguistics - . before the 19 th century, language in the western world was of interest

Chapter 26: Toward A New Century - . section 1: reinventing government. 1. . towards the end of the century many

Not If, But When With two influenza pandemics in the 19 th Century and three in the 20 th Century, we’re due for ne

Congratulation on the Establishment of KMI ! Wish a New Creative Era at KMI !!! - . insights from three flavors to three

GOLD MINING IN BROOKFIELD - Introduction. as early as 1851, government and private enterprise encouraged prospectors to

Compromise and Conflict in the early 19 th century (early 1800s) - . what compromise drew an east-west line through