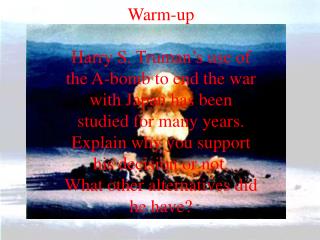 Warm-up Harry S. Truman’s use of the A-bomb to end the war with Japan has been studied for many years. Explain why you support his decision or not. What other alternatives did he have?. WARM UP. Who was present at the Yalta Conference? What was the result?