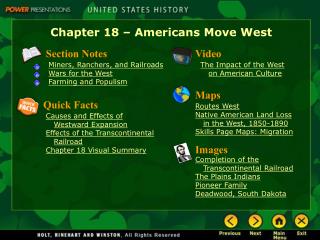 Ch 17 – The West Transformed - . i can understand how the growth of big business affected the development of the west.

Chapter 11 Review - . 1. what caused the american fur trade to move westward in the early 1800s? . a. fur companies wiped

The West and the New South - . chapter 26. 1. what groups were responsible for settling the west?. miners

Chapter 12 The New Deal - . what were the key events of the presidential election of 1932?. americans blamed hoover and