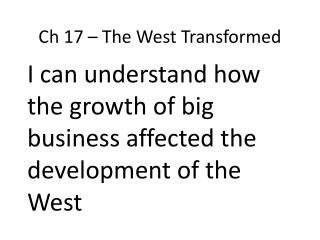 INDUSTRIAL REVOLUTION - . perhaps the most important of the three 18 th century revolutions why? because it transformed

The transformed disciple lives a selfless life! - Bless those who persecute you; bless and curse not. rejoice with those

Seeing lives transformed - . what is our mission?. our vision is that every prisoner has access to support and prayer.

Transformed by His Grace - . god’s truth transforms us. do not conform any longer to the pattern of this world, but be

Transformed by Prayer Luke 9:28-36 - . intentional. now it came to pass, when the time had come for him to be received

9 - 1: The West 9- 2: Trails to the West - . people traveled west for a better life, but faced a dangerous journey along

50 days of Transformation - . spiritual health: how god changes us. “do not conform to the pattern of this world but be

Chapter 11 - . the south and west transformed 1865-1900. after the cw, the south started to industrialize by producing