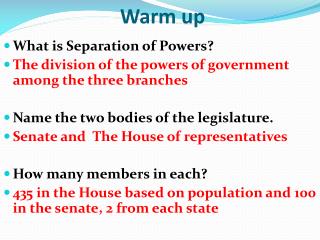 Warm up . What is Separation of Powers? The division of the powers of government among the three branches Name the two bodies of the legislature. Senate and The House of representatives How many members in each? 435 in the House based on population and 100 in the senate, 2 from each state.