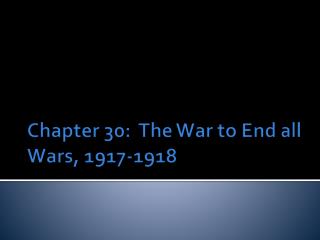 Chapter 30: The War to End all Wars, 1917-1918. Germany Starts the War. By January 22, 1917, Woodrow Wilson still wanted the U.S. to avoid war. He gave a speech and called for “peace without victory” (defeating Germany without embarrassing them). Aftermath: End of a World - . ~16: 2 0. for the victors who celebrated in the streets of cities across the globe the