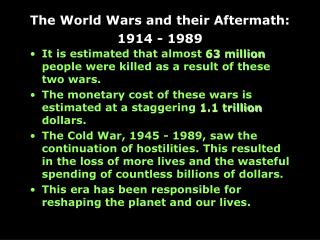 The World Wars and their Aftermath: 1914 - 1989. It is estimated that almost 63 million people were killed as a result of these two wars. The monetary cost of these wars is estimated at a staggering 1.1 trillion dollars.